Who Was St. John Fisher?

Saint John Fisher (c. 19 October 1469 – 22 June 1535) was an English Catholic bishop, cardinal, and theologian. Fisher was also an academic, and eventually served as Chancellor of the University of Cambridge.

In 1504, Fisher was appointed the Bishop of Rochester at the personal insistence of Henry VII. Rochester was then the poorest diocese in England and usually seen as a first step on an ecclesiastical career – it was not a place where Bishops remained for long. Nonetheless, Fisher stayed there, presumably by his own choice, for the remaining 31 years of his life.

When Henry VIII tried to divorce Queen Catherine of Aragon, Fisher became the Queen’s chief supporter. As such, he appeared on the Queen’s behalf in the legates’ court, where he startled the audience by the directness of his language and by declaring that, like St John the Baptist, he was ready to die on behalf of the indissolubility of marriage. The King never forgave him for what he had done.

St. John Fisher refused to condone Henry’s later marriage to Anne Boleyn. As a result, he was condemned to forfeit all his personal estate and to be imprisoned during the King’s pleasure. St John Fisher was executed by order of Henry VIII on 22nd June 1535 for refusing to accept the King as Supreme Head of the Church of England.

Our school is named after St. John Fisher because of his close links to Rochester and Chatham.

‘Fisher, Bishop of Rochester’: by Jacobus Houbraken after Hans Holbein

SJF holds St. John Fisher Feast Day each year on the Friday closest to 22nd June, commemorating with a Mass and a day of Thanksgiving.

This year’s Feast Day was on Friday 21st June. Father Baker celebrated an open-air Mass attended by students from both sites and honoured guests including local politicians, counsellors and teachers from other schools. 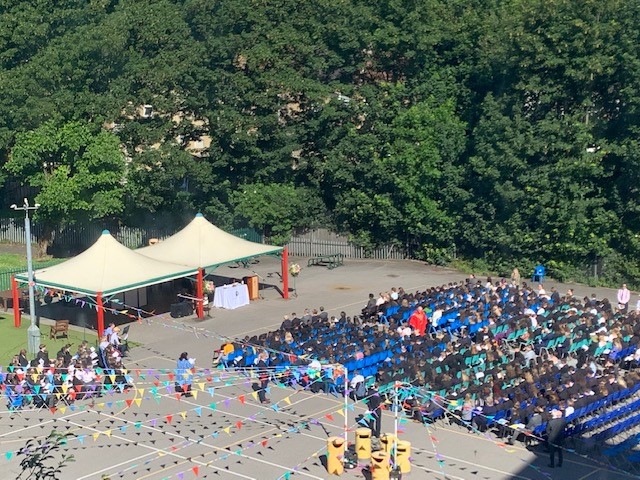 Students then completed form time activities about the life of St. John Fisher before returning to the playground for a fete filled with activities such as SJF’s Got Talent, the finals of our interform football competition and a cake sale run by Food Preparation and Nutrition students.

Make sure to read our June 2019 newsletter for a full report!

We use cookies to ensure that we give you the best experience on our website. If you continue to use this site we will assume that you are happy with it.Ok